What If I’m Not Ready?

Before I had kids, I always knew I wanted to breastfeed.  For some reason, I had it in my mind that it would be easy.  It’s natural.  It’s what our breast’s are for.  So how could it possibly be difficult?

Ha!  How adorable and naive I was.

I also always said I would only do it for a year.

In fact, I used to say a lot of things regarding breastfeeding.

They may not be able to talk, but at six months, kids know how to “ask for it.”

“I don’t want my kid to be walking when they’re still breastfeeding!”

Kids start walking at different times.  My daughter was walking around 10 months.

“I don’t want my kid to be able to pull down my shirt and help themself!”

Most babies can pull at things by five months-and they figure out real quick where the food comes from.

Now, we’re at fourteen months and still going. I don’t know if it’s because I was cheated out of a nursing experience with my daughter, (she went on a nursing strike at 2 months), or what, but I’m not ready to stop breastfeeding my son.

I think he has other plans. I feel as if it will soon be over and it makes me sad. Just the other day he wanted his sippy cup instead of milk from mama.

So it has begun. He’s eating a lot more solid foods, and breastfeeding about half as much as he used to.

Sure I’ll have more freedom. I won’t have to pump before bed anymore, (YESSSS!!!), but I also won’t get the special bonding time that is just me and my son. The bonding is the best, but it’s also some forced relax time for me. I can’t do anything, but just sit there and admire the little being I created, (enter eye roll, I know).

I am the ONLY person that is providing milk for him. It has all the nutrients he needs, and that makes me feel pretty important. And very soon, that will come to an end.

The best I can do is go with the flow and try to follow his lead. It’s difficult because it feels like he was just my little infant that needs me every second. But I need to accept that he is now an active toddler with his own ideas. 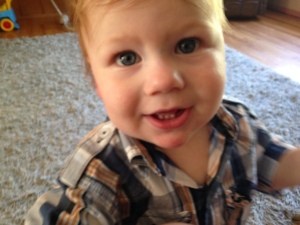 It’s amazing to watch as he grows and changes every single day. This is just another one of those changes. A milestone, I guess you could say. My baby is growing up already, I suppose it’s time to start saving for his first car.

Have your kids hit any milestones too soon (for you)?

For more breastfeeding stories, visit Zena’s Suitcase by clicking below.

I Am Not a Juice Box

So Many Pumps, So Little Time…(a Review)