A Gift Guide for 4 and Under…and a GIVEAWAY!

This is a gift guide I wrote last year, but I would like to share it again because my feelings about gifts for my kids have not changed. We haven’t moved recently, but the insane amount of STUFF the kids are sure to get, still stress me out.

One major difference for this year is my sweet little girl understands Santa, and that Santa will be bringing her gifts. She told me she is too shy to tell him what she would like, but she asked me to tell him that she would really like the Snow White movie. (For those of you that don’t know, Snow White is her favorite princess. She dressed up as her for Halloween. And she has yet to see the movie.) You got it, Little Miss!!

The last few weeks have been some of the most stressful of my life. We’ve been moving out of our house of eight years.

Moving is the worst in general. But after eight years of accumulating stuff and almost four of those years, accumulating baby and kid stuff….there’s a lot of, well, stuff. I’m ready to add an extra two years to our lease just so we can postpone our next move.
My Facebook post from the other day says it best. 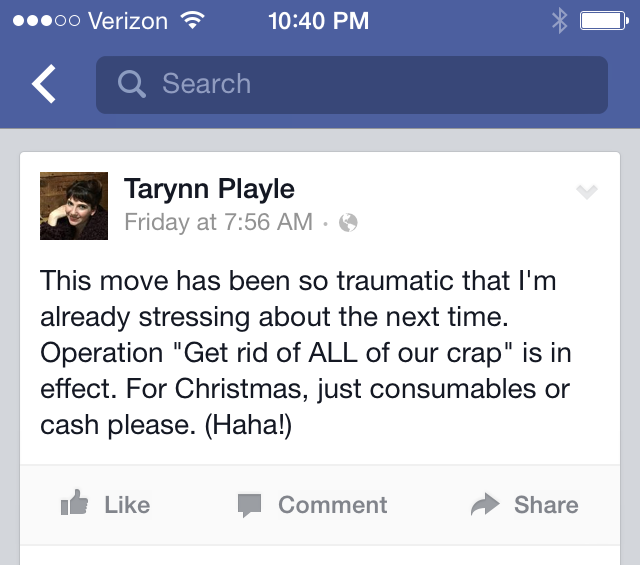 When I wrote the part about Christmas, I was joking.

Then the more I thought about it, I realized I wasn’t joking at all.

Last Christmas, my husband and I were so excited to buy a bunch of toys for the kids. We got all sorts of “cool” ones. When the kids finally opened them, they were indifferent. (At least Z was. R had no clue what was going on, he was only six months old.) It was toy overload. And almost a year later, we’re still getting rid of the toys that were of no interest.

Unless of course, a kid finds one of the toys in the “to donate” box. It suddenly becomes fascinating.

This year, we’re going to do things a bit differently.

Here is my list of gifts for the three and under crowd:

You can’t really go wrong with some cold, hard cash. Either mom and dad can stow it away for the kiddo’s college fund. Or, the little one can put it in their piggy bank, (if they have one-if not, maybe get them one, plus a hand full of change for it.) Toddlers love learning how to put things in adorable shaped objects. Be sure to watch them like a hawk so they put it in the piggy bank and not in the trash. (Don’t ask me how I know, I don’t want to talk about it.)

Pretty much anything that can be eaten or used up, then thrown away.

My oldest would be thrilled to open up a box of band aids. What’s not to love for a three year old? It’s a STICKER that you’re actually SUPPOSED to put on your body. It also happens to make injuries feel better. AND, it has a favorite character on it, (it doesn’t matter which one, all of the characters are amazing.)

Take the kid to the zoo, aquarium, the local “imagination station”, or anywhere else that’s fun for a little one. The memories will far outlast the ten minutes they are engaged with the obnoxious sound making toy.

There are always exceptions.

Handmade items are special. Those are things the kiddo can keep forever.

Sometimes there’s an item or two that you KNOW the little one (or mom and dad) would love and use, (clothes anyone?)

And of course books are always a great fall back.

So when you’re shopping for the three year old in your life, maybe try to look past the loud toys with the flashing lights (Please!!!) and get them something that not only will be USED, but also won’t be hanging around long enough to make mom and dad go crazy.

But they want toys! They want stuff to open! They’re missing out!

They already have plenty of toys, and let’s face it, we all know the boxes the stuff came in is more interesting. They can open plenty of fun things, bubble bath, stickers, snacks,…even art supplies!

Last year my Z had so many presents to open, she had to take two breaks. She got bored.

At this age, they don’t need all the stuff, they just love being with family. All they want to do is climb all over the grandparents and they’re good.

But next year, when my oldest is four? No clue. I guess we’ll figure it out when we get there.

So, now that my girl is four, she is definitely looking forward to opening some gifts. But, it doesn’t have to be a ridiculous amount! She’ll be thrilled to get that movie and that’s it! Who knows what will be in my gift guide next year. I just hope it doesn’t involve a fancy mini tablet perfect for five year old hands, and a make-up set that she won’t be able to do without.

What do you have on your Gift Guide?

Now for the super awesome GIVEAWAY!!

This post is part of the #12DaysofBlogmas, put together by the lovely Julie at Girl On the Move, and Joanna at Motherhood and Merlot. Be sure to visit their blogs and then enter the Giveaway below to win a $230 Gift Card from Amazon!!!
a Rafflecopter giveaway

A Fun Easter Game for the Whole Family